Home » Food education » Teaching Kids About Food: The Lesson that Turned My Twins Into Spinach Lovers

Teaching Kids About Food: The Lesson that Turned My Twins Into Spinach Lovers 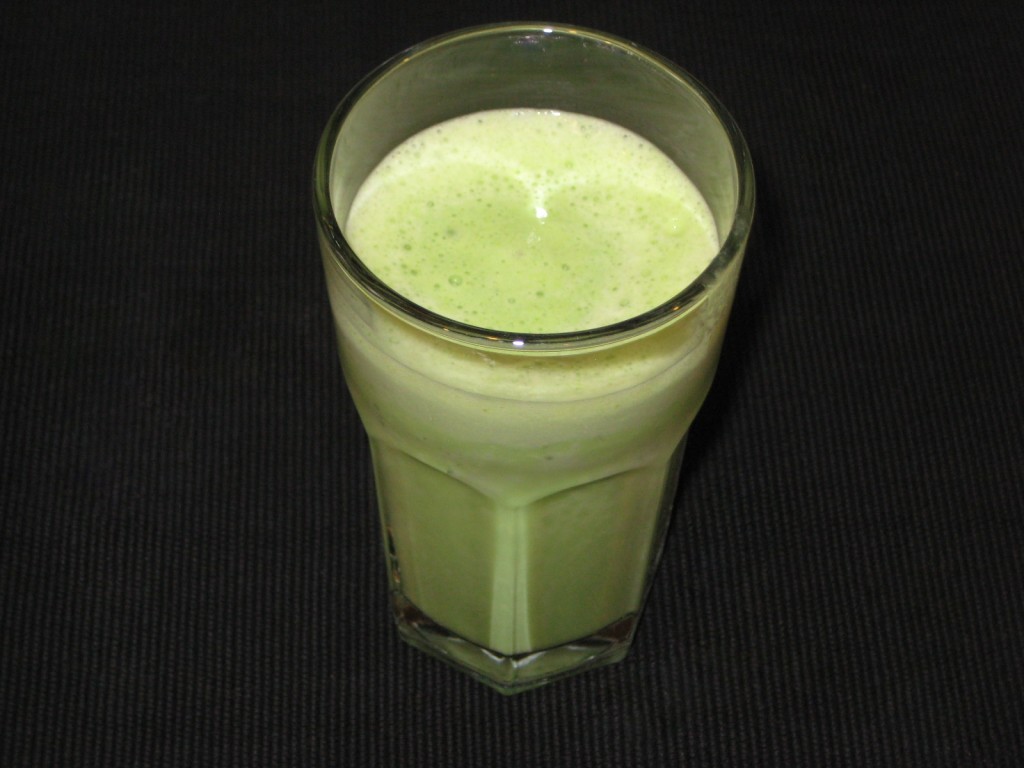 I know that it’s typ­i­cal kid behav­ior, but I’m really tired of hear­ing my chil­dren say “I don’t like that!” about cer­tain foods. At ages 7 and 4, I feel like it’s high time for them to start expand­ing their palates. Tod­dlers are nat­u­rally fear­ful of  try­ing new foods–a built-in pro­tec­tive mech­a­nism.  But we’re out of the tod­dler years now and they’re still resist­ing a  lot of stuff, par­tic­u­larly any­thing green. Enough is enough!

Over­all, I think I’ve done a good job at pro­vid­ing them with the right kind of food. I serve fruits and veg­gies at every meal and snack. I con­stantly vary the menu–from day to day and meal to meal. I try to chal­lenge them with their eat­ing and never short-order cook. Oh, and I’ve learned my les­son about pres­sur­ing them to eat (READ: Con­fes­sions of a For­mer Food Pusher). But there’s one thing that I haven’t always been so good about, and that’s edu­cat­ing them about food.

Putting good food on the table is an impor­tant part of rais­ing a healthy eater. But often­times, it isn’t enough. Read­ing the book French Kids Eat Every­thing really high­lighted that I should be doing more to teach them how to love it, too. Unfor­tu­nately, I’m get­ting a late start (as author Karen Le Bil­lon noted in our recent Q&A, it’s best to begin when they are babies). But as they say, bet­ter late than never.

This is a les­son that I came up with myself, and I use it as a way to talk about food–where it comes from and all the dif­fer­ent ways that it can be eaten. I call it “Food Three Ways.” The idea is to pro­vide one food in three dif­fer­ent forms.

A few days ago, I decided to try it with spinach–one of the foods that my kids claim to not like. I’ve served it in pasta, sauteed with gar­lic and in a salad. Each time, they’ve refused to eat it. They do like the Spinach-Walnut Pesto that I make. How­ever, I’m not sure that I’ve ever told them that it con­tains spinach. Let the chal­lenge begin!

On the day of the les­son, my old­est son was off at a sleep­over party. That left me down to two kids–4-year-old twins Jamie and Reese. Reese is a good eater; she likes every­thing from mixed green salad to roasted red pep­per hum­mus. Jamie is trick­ier; he”s more of a mac ‘n cheese guy and has a major sweet tooth. Veg­gies are not his strong suit.

I pre­pared a green smoothie with a large hand­ful of spinach, a sliced banana, a cou­ple spoon­fuls of vanilla yogurt (I used Stony­field Organic French Vanilla), whole milk and crushed ice. (I tend to just throw things in the blender; if you want the exact recipe, let me know by leav­ing a com­ment.). Next, I sliced pieces of baguette (locally made with only a few high-quality ingre­di­ents) and spread them with Spinach-Walnut Pesto (some­thing that they like on pasta but I’ve never tried serv­ing on bread before). On each plate, I placed one fresh spinach leaf. I also added a sec­ond piece of baguette with real but­ter (I wanted to make sure that there was one  item that they would be happy about). 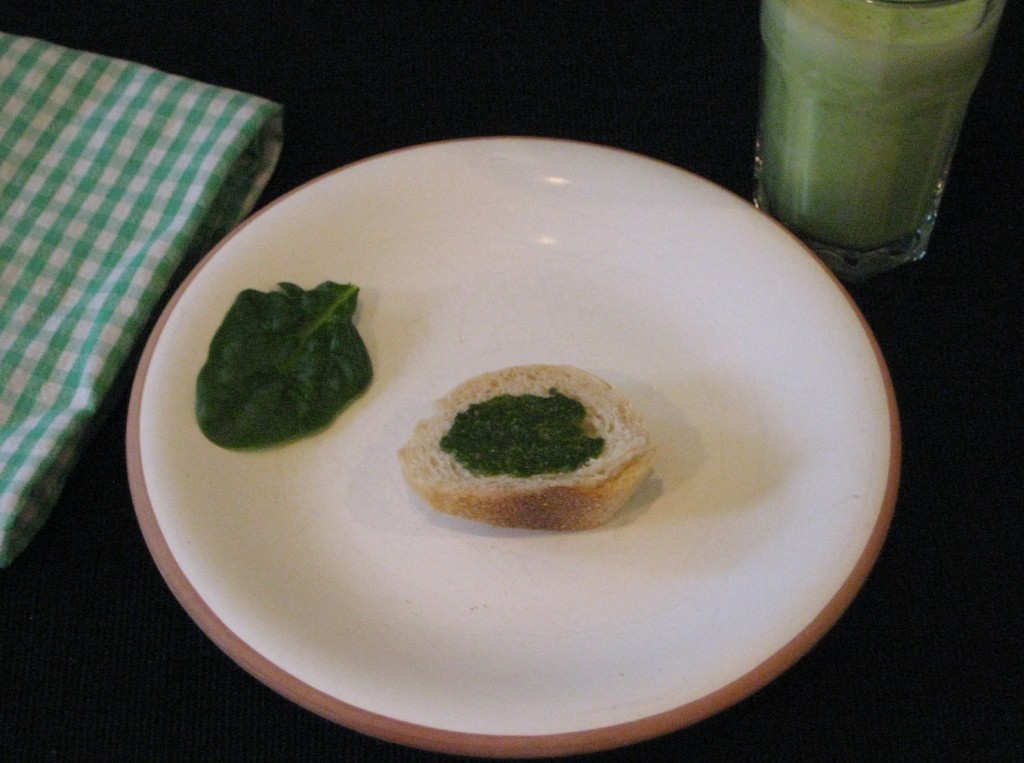 When I called the twins to come to the table for a food tast­ing, Jamie was the first to arrive. He looked at his plate and said, “Oh, yummy!” (Not kid­ding!). Reese, who was trail­ing behind, sat down with­out say­ing any­thing pos­i­tive or neg­a­tive. I took it as a good sign. 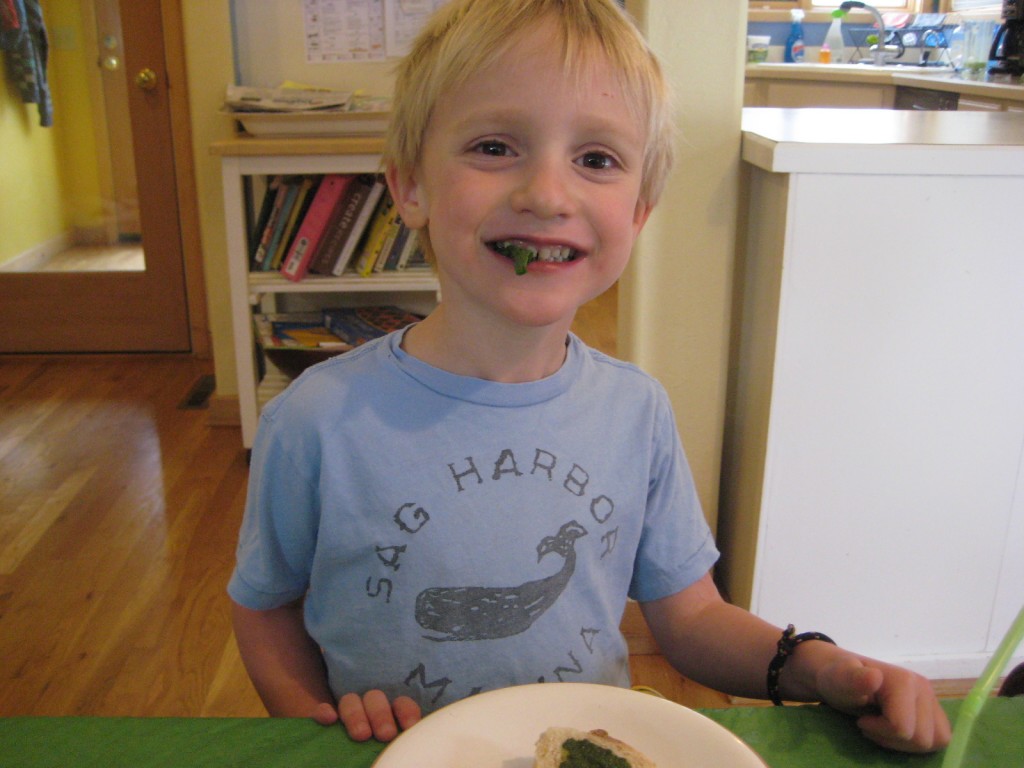 Jamie started by pick­ing up the spinach leaf and ask­ing, “What’s this? Salad?” I said, “It’s spinach.” Then I explained that we were hav­ing a food tast­ing. He pro­ceeded to pop the spinach leaf in his mouth. Reese fol­lowed his lead. 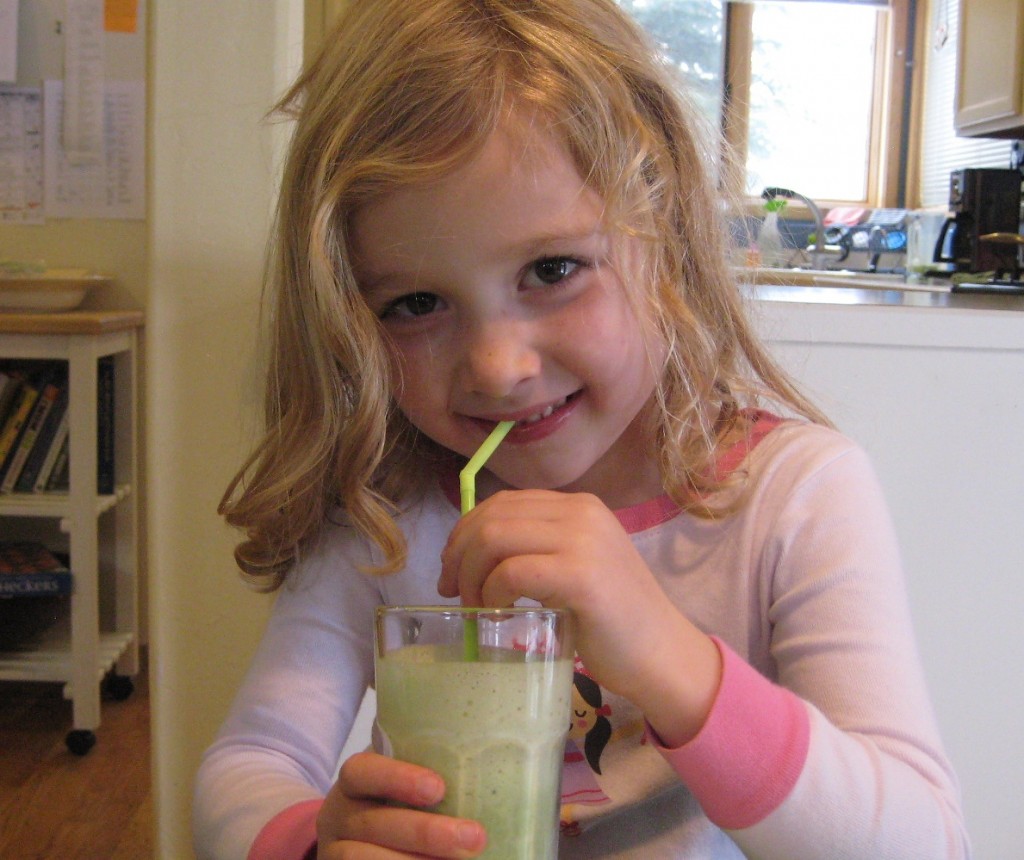 Next came the smooth­ies. They didn’t say much as they sipped but seemed happy. I then explained the gist of the les­son: I had served them spinach in three dif­fer­ent ways–a plain leaf, pureed in pesto, and blended up in a drink. I said, “See how the smoothie is green? That’s spinach!” “See,” I added, look­ing straight at Jamie. “You say you don’t like spinach. But you do!” He said, “Yeah, you’re right!” 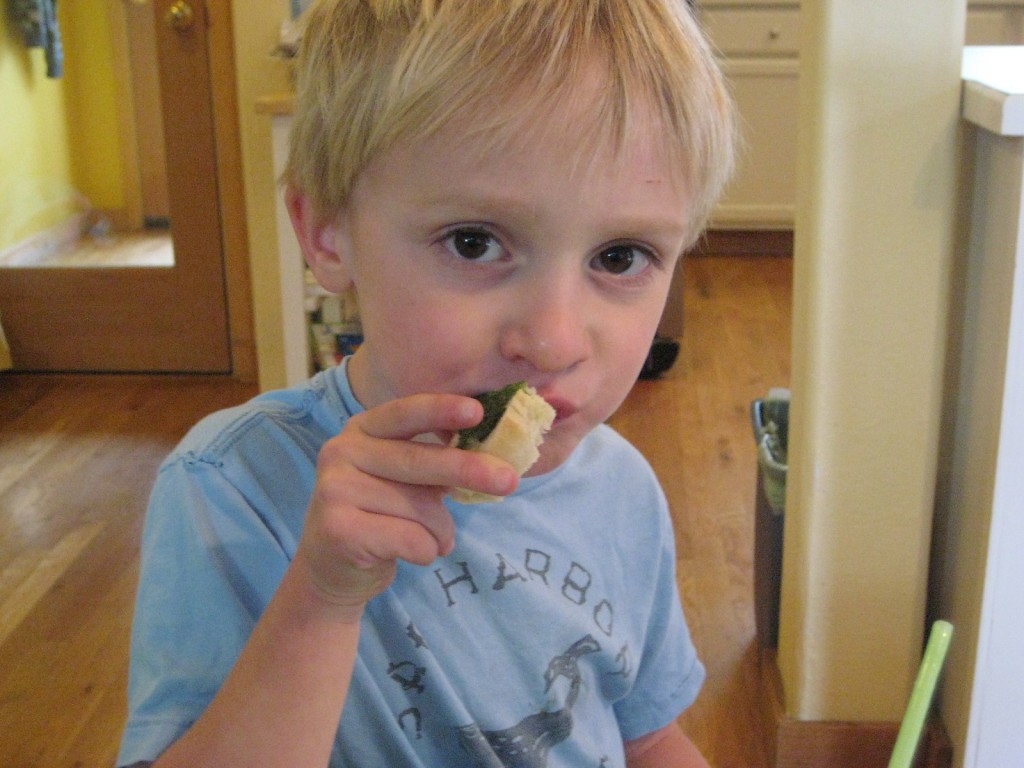 Finally, the baguette with the pesto. This was the one that I was most skep­ti­cal about. Even though they eat the pesto on pasta all the time, I won­dered whether they would reject it this way. Nope–wrong again. 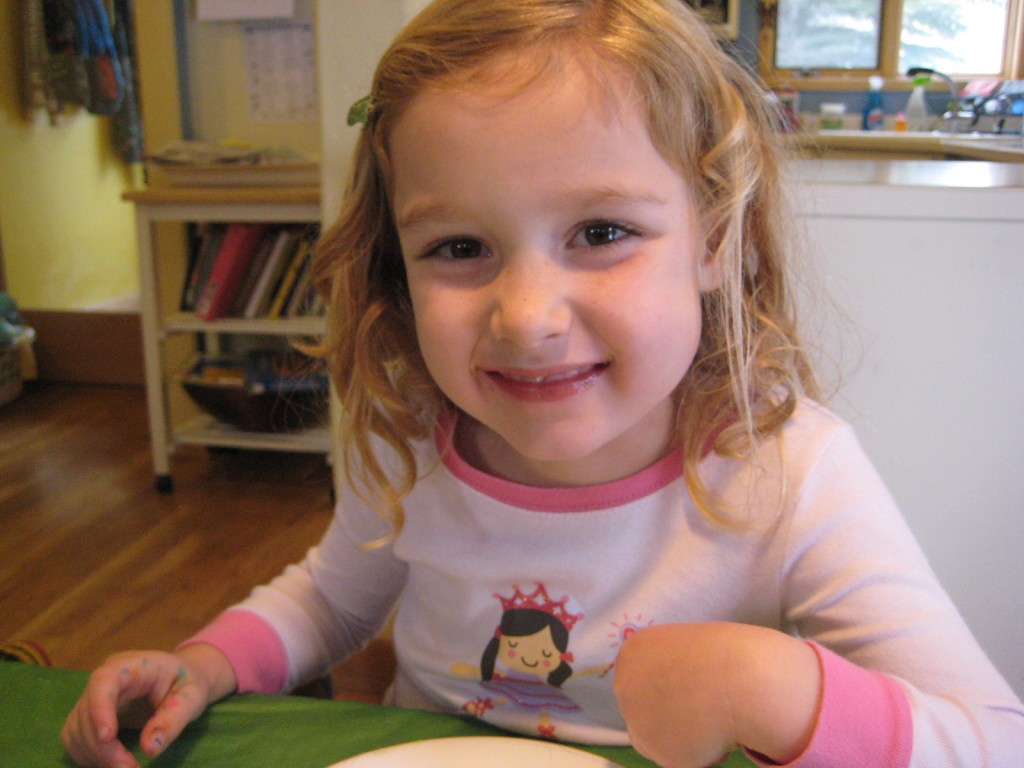 While they ate, I sat across the table and talked to them about how spinach grows.

If you’re think­ing that this all seemed to go a lit­tle too well, I’ll con­fess that I thought so, too. But I did have a few things going in my favor. Big brother was gone for the after­noon, which meant they had a tem­po­rary reprieve from his teas­ing. I did the les­son at 3:45 p.m., when they were hun­gry but not too hun­gry. I didn’t talk it up beforehand–I  just put the plates down on the table. And I think they liked the “exper­i­ment” aspect of it, too. There wasn’t any pres­sure to eat it.

Obvi­ously, this food les­son worked out really well for us. But when doing it your­self, don’t get hung up on whether or not they actu­ally eat the food. Encour­age them to taste each item, but don’t insist. If they refuse, have them hold it, smell it and talk about it. If they do taste it, ask them to describe it (if they can’t come up with words, tell them to make a face). What­ever you do, don’t ask if they like it. Because you’ll be set­ting your­self up for a “No!”

Every time that I’ve done “Food Three Ways,” it’s been a suc­cess. My kids don’t always eat every­thing, but they almost always taste it with no prod­ding. Here are some of the other foods that would work well (plus, some ideas of how to pre­pare them):

How do you go about edu­cat­ing your kids about food? Do you have a back­yard gar­den or talk to them about where it comes from? I’m really inter­ested to hear–please leave any com­ments down below!

6 Responses to Teaching Kids About Food: The Lesson that Turned My Twins Into Spinach Lovers